The Beast Within was the first track on the I’m Going To Tell You A Secret DVD, released June 20, 2006 – “Blessed is he who reads aloud the words of the prophecy and blessed are those who hear and who keep what is written therein, for the time is near. He is coming with the clouds. “

After we returned from our trip to Fresno, I prepared for my next reading with Chuza. I was looking forward to this reading because it had been quite some time since we had scheduled time together. I still relied a great deal on my intuition and common sense, but Chuza always could nudge me in the right direction if I veered off track. These readings also prevented me from listening entirely to my ego and helped me stay in touch with my spirituality. (Coincidentally, this would be my last reading with Chuza.)

It was around this time that Madonna released her DVD; I’m Going To Tell You A Secret. I was once again amazed at the synchronicities between Madonna and me. She had put this movie together during the same time that I wrote the first two chapters of this story. It appeared that we had very similar views on several different things. The only difference Madonna aimed at changing the world, whereas I aimed at improving my tiny little universe. 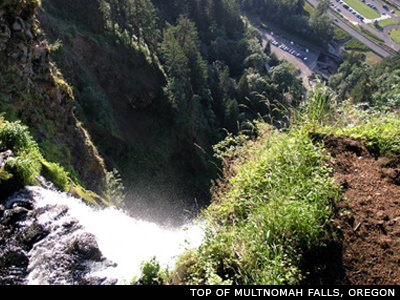 Coincidentally, Ruth, the person who inspired me to write this story, was visiting from Washington, DC, the very week “I’m Going To Tell You A Secret” was released. I popped the DVD into the DVD player and Ruth, and I started watching it. She was not a Madonna fan but admitted that the DVD had her attention. We got about halfway through it when we decided it was time to head out for our planned trip to the Columbia River Gorge.

It was the summer solstice (June 21). Dolos, Ruth, and I had scheduled a drive through the Columbia River Gorge. I wanted to show Ruth and Dolos Horsethief Butte, the place that Benjamin and I had visited earlier in the year. It took a couple of hours to get there, but once we did, we had a great time hiking, rock climbing, and exploring nature. We left there and visited The Bridge of the Gods and Multnomah Falls. During our time at Multnomah Falls, Ruth leads Dolos and me on a mile-long hike to the top of the falls. The view from the top was incredible. It was the perfect way to bring in the first day of summer. Ruth left Portland two days later.

The End of the World: Mid-July rolled around, and it felt like the entire world was coming to an end. Every time I turned on the television, it appeared as though humanity was falling completely apart. Israel was fighting with Lebanon. North Korea was testing nuclear missiles, and reports said that the United States had killed over 14,000 Iraqis in the first six months of 2006. Then I went to see the movie “An Inconvenient Truth” and became alarmed at the condition of the Earth. Proud of the fact that I had not owned a car for over ten years (except between October 2004 and October 2005, when I moved to Florida and Oregon), and that I walked or rode my bike almost everywhere I went, I still felt as though I could do a lot more when it came to helping the environment. The most exciting thing about all of this was that I worked for an organization that promoted bicycling and walking.

The end of the world was on everyone’s mind and it was all over the media. CNN (Edge of Disaster), Discovery, the History Channel (Doomsday Prophecy 2012), and the Weather Channel (It Could Happen Tomorrow!) all seemed to be talking about the possibility that the world could fall apart at any moment. It was evident that the media focused on this concept, and since everyone was tuning in, it appeared to be growing in the collective consciousness of humanity. Not until this point in my life did I realize just how powerful our minds are when we bring them all together to focus on something collectively. The possibilities are endless. I realized that if everyone focused on the same idea or concept, that idea would eventually manifest into reality, whether it was our destiny, or not. I hoped that everyone would turn this around, think positive, strive for love and peace, and realize that the universe wants nothing but abundance for everyone. I hoped that “An Inconvenient Truth” would have a sequel, which would focus on the things humankind could do to correct the current problems. This movie left me feeling helpless.

I thought about the concept of “creating realities” and thought about those people responsible for creating war and destruction. I concluded that those people had to be completely Godless, regardless of their excuses, religion, or personal intentions. I decided right then and there to stop participating in all of the horrible, negative energy and decided to turn away from those emotionally addictive shows. From now on I would try to focus on the positive aspects of life. I focused on all that was good and I prayed and meditated for the well-being of everyone on the planet. While it’s essential to stay informed, I learned that it’s even more important to create a sacred place away from the media, and “Breaking News!” and focus on the good things in life.

[from Revelation 1:3]
Blessed is he who reads aloud the words of the prophecy
And blessed are those who hear
And who keep what is written therein
For the time is near

[from Revelation 1:7]
He is coming with the clouds
And every eye will see him
Everyone who pierced him
And all the tribes of the earth will wail on account of him

[from Revelation 2:1-4]
Those of you who have not learned what some call the deep things of Satan
I know your works, I know your toil, and your patient endurance
And how you cannot hear evil men
But have tested those who call themselves apostles, but are not
And found them to be false
I know that you are enduring patiently and bearing out for my namesake
And you have not grown weary
But I have this against you
That you have abandoned the love you had

[from Revelation 13:1-10]
And I saw a beast rising out of the sea with ten horns and seven heads
And a blasphemous name upon its head
And the beast that I saw was like a leopard
Its feet were like a bear’s
And its mouth was like a lion’s mouth
And to it the dragon gave his power,
And the whole earth followed the beast with wonder

And they worshipped the beast saying
“Who is like the beast and who can fight against the beast?”
And the beast was given a mouth uttering haughty and blasphemous words
And it was allowed to exercise authority for forty-two months
It opened its mouth to utter blasphemous words against God

It was allowed to make war on the saints and to conquer
And authority was given it over every tribe
And a people and tongue and nation
And all who dwell on earth will worship it in vain
If anyone has an ear let him hear
If anyone who slays with the sword, with the sword

[from Revelation 21:1-8]
Then, I saw a new heaven and a new earth
And I heard a great voice from the throne saying:
“Behold the dwelling of God is with men
He will dwell with them, and they shall be his people
And God himself will be with them
He will wipe away every tear from their eyes
And death shall be no more
Neither shall there be mourning, nor crying, nor pain anymore
For these things will have passed away

But as for the cowardly, the faithless, the polluted
As for the murderers, fornicators, sorcerers, idolaters, and all liars
Their lot shall be in the lake that burns with fire.”