Hey You was performed for Live Earth on July 7, 2007, in London, England. – “Keep it together, you’ll make it alright, Our celebration is going on tonight, Poets and prophets would envy what we do, This could be good, hey you”

A week later, July 7, Madonna performed for Live Earth. I watched her live, online, on my computer.

“Madonna set the world’s feet tapping as the megastar rocked the London leg of the Live Earth gigs which were beamed to 2 billion people. Wearing a below-the-knee puff-sleeved dress, matching knee-length leggings and black patent Mary-Janes, the star of the show, Madonna, took to the stage for her performance of Hey You where she was joined by a choir of school children.

She then strummed an electric guitar to Ray of Light before bursting into La Isla Bonita accompanied by cult New York Gypsy punk band Gogol Bordello. Madonna thanked Al Gore and Luke Wall, the brainchild of the nine concerts across the globe, “for giving the world the wake-up call it so badly needs and for starting an avalanche of awareness that we are running out of time”. She said: “Let’s hope tonight’s concert and the concerts going on around the world are not just about entertainment but starting a revolution around the world. If you want to save the planet let me see you jump.”

The Material Girl singer closed the London event with a blistering rendition of her disco hit Hung Up. The events had begun in Sydney, where the line-up included Crowded House, and carried on to Tokyo, Johannesburg, Shanghai, London, Hamburg, New Jersey, Washington, and Rio de Janeiro. The concerts were carbon neutral, with all energy to Wembley Stadium and the other venues supplied by renewable sources.” ITV.com

When her performance was over, I closed down my computer, gathered my things, and headed out to my favorite outdoor location. It was 2:31 PM west coast time. The weather was perfect in Portland, and I didn’t want to miss one more second of it.

While I was out at Rooster Rock State Park, enjoying nature and the incredible weather, Dolos was attending his monthly shaman training. I thought about shamanism and related that to Live Earth. Shamans recognize that everything in our universe, including our planet, the cosmos, and everything around us is a living organism and has a spirit. Live Earth seemed to project that same feeling of well-being, good health, and harmony for our planet. People all around the globe were becoming more aware of just how vital our sanctuary is to our survival. While shamans use drums, chanting, flutes, and rattles during their healing ceremonies, the musicians that participated in Live Earth on 07/07/07 were practicing the same sort of thing, in a very different way. It was a great day.

On July 22, I celebrated my forty-sixth birthday.

“Happy birthday! Today the Sun returns to the position it was in when you were born. As would seem appropriate with this transit, today is a day of new beginnings, and the influences you feel today will affect the entire year to come. However, this does not mean that the whole year will be disappointing if today doesn’t work out exactly as planned. You are receiving a new impulse from the energy center within you, as symbolized by the Sun. Therefore any new venture that you start at this time will ride the crest of this new energy and will very likely come to an acceptable conclusion. Whatever you do or begin today will bear the stamp of your individuality more than anything else. This is the day to assert yourself anew.” – Copyright Astro.com

Dolos and I celebrated by spending the night at the Wind Mountain Resort, located in the Columbia River Gorge, on the Washington State side of the Columbia River. The next morning, after having breakfast in the cafe downstairs, Dolos and I checked out of our room and headed to the Trout Lake Arts Festival, which was about a twenty-minute drive to the foothills of Mt. Adams. It was a beautifully clear day, and at one point during our journey, we were able to see Mt. Hood clearly to the south, and Mt. Adams to our north. I spent most of that day talking on my cell phone with friends and family, as they called to wish me a happy birthday. At 1:00 PM my sister called and at 2:00 PM my friend, Lois, from Sweden called. She remembered my birthday and was called right before she headed off to bed. (It was 11:00 PM Sweden time.) Coincidentally, but not intentionally, my friend Ruth called at 3:21 PM. It seemed as though almost everyone remembered my birthday this particular year and that felt special to me. There were only a couple of friends that didn’t remember, but I didn’t hold that against them. 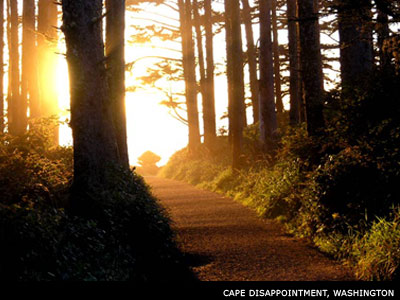 After we left the arts festival, Dolos and I drove to The Dalles, where we caught a movie and then had a nice dinner. After dinner, Dolos and I headed across the Columbia River, back into Washington State, to Horsethief Butte. I had decided the day before my birthday that I wanted to spend the last several hours of my birthday drumming and meditating on top of Horsethief Butte. We arrived at 7:30 PM, about an hour and fifteen minutes before sunset.

After we headed down the Horsethief trail, it wasn’t long before we began our ascent to the top of the butte. Once we got about halfway to the top, Dolos decided that he had found his sacred spot for drumming and stayed behind. I continued my hike to the top. About three-quarters of the way up, I decided to stop and take a moment to burn some sage so that I could give thanks to the creator, for such a beautiful day and another year of living. Once my sage was gone, I continued my hike to the top. Once I arrived at the top, I could hear Dolos’ rattle and drum in the distance. I noticed that two crows flew directly overhead. I thought of them as our guardians.

I spent the next hour alone and had my private ceremony for all of my friends, my family, and everyone that came into my thoughts. I then focused on those things that I wanted to manifest for everyone and myself, for the year ahead, and put those intentions out into the universe. As I did this, I continued to play my drum and in between sets could hear Dolos’ still drumming in the distance. Right as the sun was about to set on the horizon, I took the photo at the top of this page. That’s Mt. Hood on the left. I took the photo because I wanted to remember that moment so that a year later, I could look back at that moment to see how much my life had changed.

After the sunset behind the horizon, I gathered my things and began my descent. Within a few minutes, I found Dolos patiently waiting where I had left him just an hour earlier. Once we reunited, we did some more exploring, and then we both headed back to the car, which was parked out on the highway. During our fifteen-minute walk back to the car, we talked about the things we experienced during our meditations. A few minutes later we began our drive back toward Portland. During the next hour and a half, we hardly said two words to each other. We both were completely zoned out.

Dolos dropped me off at my apartment at 10:30 PM, before heading to his studio for a good night’s sleep. I entered my apartment building and took the elevator to the fifth floor. As I turned the key to the door of my apartment, I thought about my friend Lois in Sweden and figured she was just waking up. It was Monday morning for her. I unpacked my things, took a quick shower, and within a few minutes went to bed. Before I drifted off to sleep, I gave thanks for what I considered to be a perfect birthday.

The next day when I went to my mailbox, I found a birthday card from my sister. The card read “For My Brother: My Friend. There’s a special bond between us that’s not quite like any other, that’s because you’re just as much my friend as you’re my brother. I love you very much, and I hope u have a great B-day – Big Sis” It was such a beautiful card. I loved it.

Hey you,
Don’t you give up, it’s not so bad
There’s still a chance for us

Hey you,
Just be yourself, don’t be so shy
There’s reasons why it’s hard50

Keep it together, you’ll make it alright
Our celebration is going on tonight
Poets and prophets would envy what we do
This could be good, hey you

Hey you,
Open your heart, it’s not so strange
You’ve got to change this time

Hey you,
Remember this, none of it’s real
Including the way you feel

Keep it together, we’ll make it alright
Our celebration is going on tonight
Poets and prophets would envy what we do
This could be good, hey you

Hey you, save yourself
Don’t rely on anyone else

Hey you,
They’re on the fence, you’ve got a choice
One day it will make sense
Hey you,
First love yourself, or if you can’t,
Try to love someone else

Keep it together, we’ll make it alright
Our celebration is going on tonight
Poets and prophets will envy what we do
This could be good, hey you