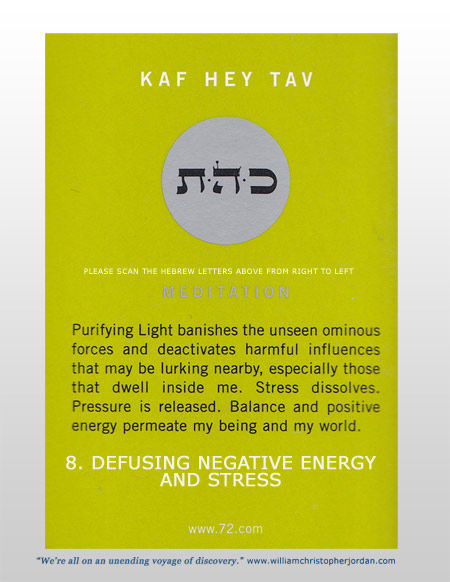 The following morning, after checking my email, Pam and I went for a drive around Hayward. Our first stop was the Hayward Plunge; a public indoor swimming pool, surrounded by a small park and a hiking trail. Since neither of us was interested in swimming, we opted for a short hike. As we walked and talked about life, I snapped the following photos: 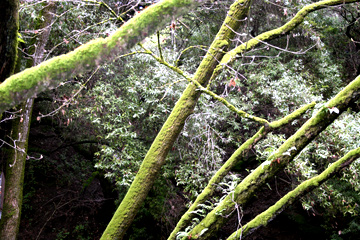 Graffiti painted on the side of a rock face cliff. 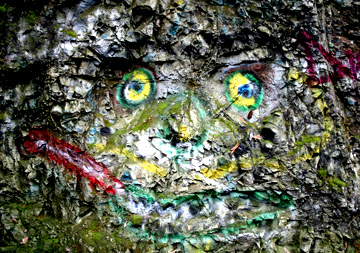 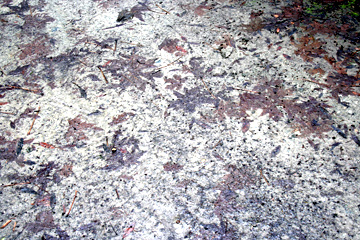 And some more graffiti painted on the side of a tree. 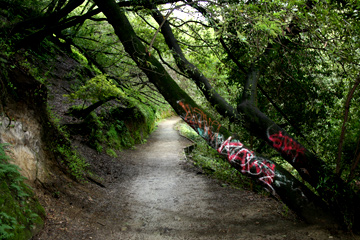 As we were exiting the park, I recognized the sound of a hummingbird. I looked up and noticed one sitting on top of a nearby pine tree. I took the following photo. 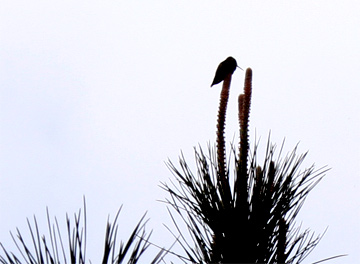 The messages from the hummingbird described my time with Pam perfectly.

After we left the Hayward Plunge, Pam took me on a tour of downtown Hayward and various other sites in the area. I was grateful to Pam for taking the time to show me around. It was nice spending time with her. We returned to Pam’s place that afternoon. 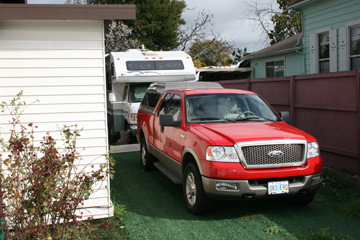 Later, while Pam was showing me the backyard, she discovered a domesticated rabbit sitting between two garbage cans. It was a complete mystery as to who the rabbit belonged to, or where it came from, but it made Pam happy to have around. 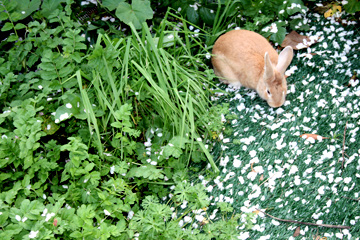 The rabbit was very tame and didn’t mind anyone holding it, so Pam decided to let it roam around the backyard as long as it wanted to stay. Rabbit brings the following wisdom: Guile, Paradox and contradiction, Living by one’s own wits, Receiving hidden teachings and intuitive messages, Quick-thinking, Humility, Moving through fear, Strengthening intuition – Copyright www.animalspirits.com

I thought the rabbit was a perfect gift for Pam.

I departed Pam’s place around 6:00 PM and headed into San Francisco to meet Dan for dinner. We had made arrangements in Guerneville to get together during my time in the bay area.

After battling intense traffic on the Bay Bridge for over an hour, I finally made it to his place around 7:30 PM, just as we had planned.

After a quick tour of his home, we headed out for a bite to eat at a restaurant named, Chow. The food was delicious. After dinner, Dan showed me his neighborhood, and we stopped in for a scoop of ice cream. I had sorbet. We eventually returned to Dan’s house to listen to some music and before we knew it the conversation had turned to the subject of God.

Dan was an atheist, so he had powerful feelings about the concept of God and organized religion. And since my journey was all about God, I listened carefully to what he had to say. He put on a CD by Julia Sweeney, and we both sat and listened to her talk about her experiences with religion, and God. It was hilarious at times. As I listened to Julia’s CD with Dan, I thought about “Answering Our Prayers” by Dropping Daylight. I thought that song would be a perfect fit for my evening with Dan. Dan burned a copy of Julia’s CD for me, along with several other music CD’s.

Around 11:00 PM I told Dan that I needed to start heading back to Hayward. He walked me to my car so he could mail some letters and that’s when we discovered that my car, or Pam’s car to be precise, had been towed. I had parked in an illegal space. Rattled from the Bay Bridge experience, I got careless and parked in the wrong spot. Dan and I spent the next hour tracking Pam’s car down, and he drove me over to the towing company’s lot, so I could retrieve it. The whole ordeal set me back $418.00. I was completely devastated! Then I remembered my astrology forecast for the day.

Today’s Astrology Forecast: Show Your Injuries | During this time a particular sore point of yours is disturbed, a sensitivity or vulnerability that you may not be aware of. So it may well be that you react as you have perhaps always reacted to such situations: You are distressed, hurt, you distance yourself and forget the incident as quickly as possible. If you do not react by withdrawing as you usually do, but instead show that you have been hurt, you will earn the freedom to behave differently in this, for you, typical situation. That is, of course, easier said than done, but this influence offers you an outstanding opportunity to stand far enough outside yourself to show your own injuries. If you recognize the situation in question and react to it, you will win new strength and confidence. Copyright www.astro.com

After we retrieved Pam’s car I returned to Dan’s house to take a shower. I knew I wouldn’t be able to do that once I arrived at Pam’s, I finally left Dan’s house and headed back to Hayward, and arrived at Pam’s place around 1:00 AM. I parked her car and crawled into the back of my truck completely worn out.