My mind was racing the entire night. I’m not sure what was going on, but I kept sleeping, waking up, sleeping, waking up. I had a lot of dreams, but couldn’t remember any of the details. It was a strange night. It honestly felt like some initiation.

Once I finally got up and packed, I headed up to the Fontana Village General Store for a Moon Pie and an RC Cola. Classic. Nostalgic. North Carolina! 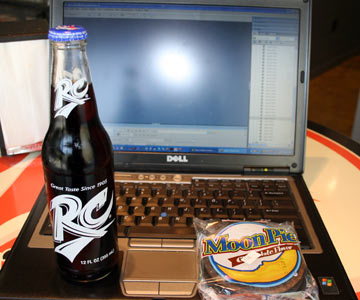 I then took a moment to publish day forty-nine of my journal, and then went up to the lodge to check out of my campsite. There wasn’t a lot to do or see, so I wasn’t interested in staying the second night. After I checked out, I went to the restaurant in the lodge for a spot of lunch. 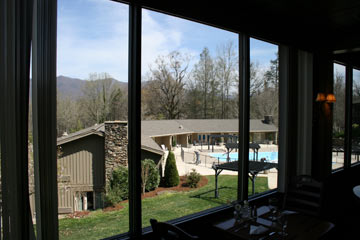 While I was waiting for my meal to arrive, a Ladybug landed on the window directly beside me.

Note: Once again, keep these message in mind going forward.

I was amazed that such a small critter had such powerful medicine. I also couldn’t believe how well my photograph turned out. 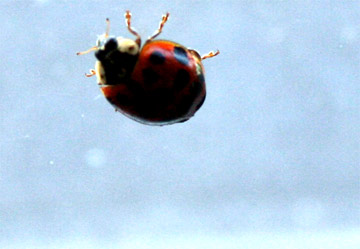 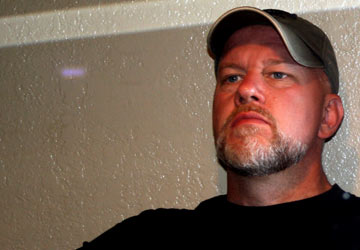 While I continued waiting for my food, I snapped a cool photo of the sky. If you enlarge it, you should be able to see the image of someone’s face. It’s in the middle of the photo and stretches from the center to the top. It looks like a teenage boy. 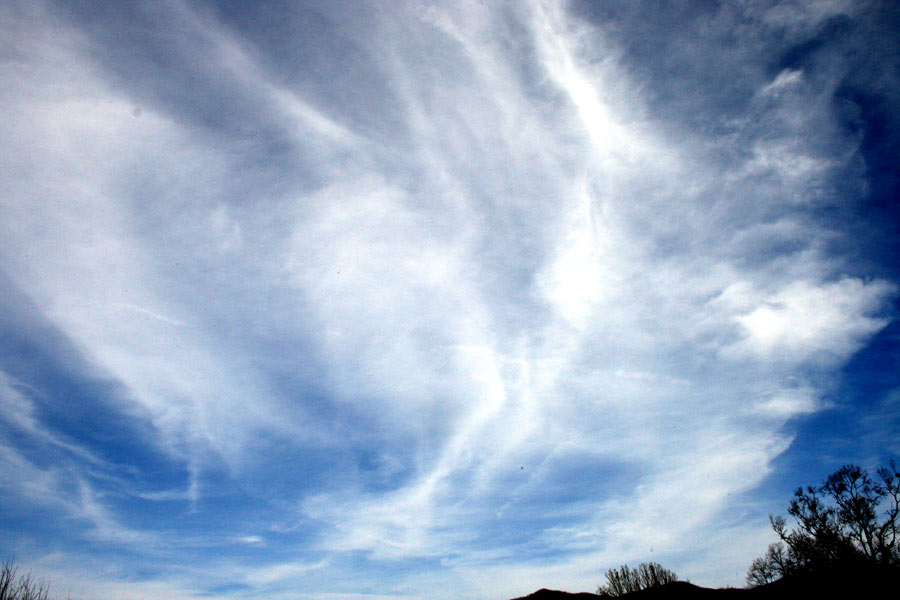 After lunch, while walking to my truck, I saw this image in the sky. 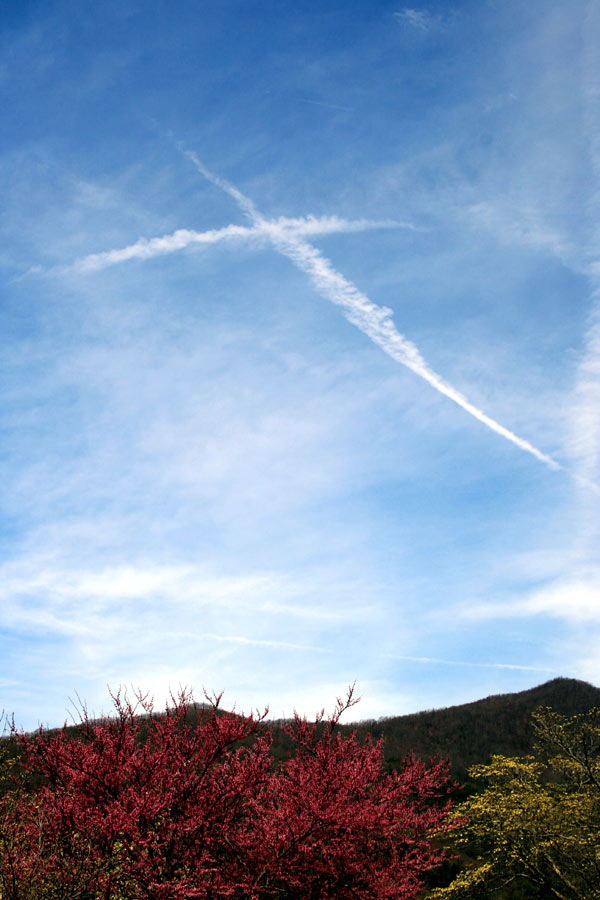 It was a magical morning. I departed Fontana Village around noon and headed towards Cherokee Indian Reservation. During my drive, I finally reunited with the hawk. This hawk didn’t fly over my truck or make itself known to me in any noticeable way. It just circled over a field, apparently looking for its next meal.

I arrived in Cherokee about an hour later, and once again it was a beautiful, sunny, pleasant day. 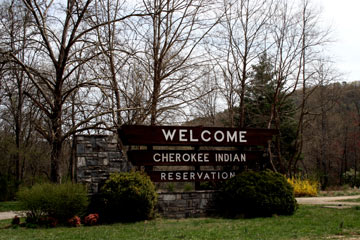 Once I arrived, I parked my truck and took a walk down by the Oconaluftee River, which runs through downtown Cherokee. I just had to soak my feet. The water was so clear and flowing. 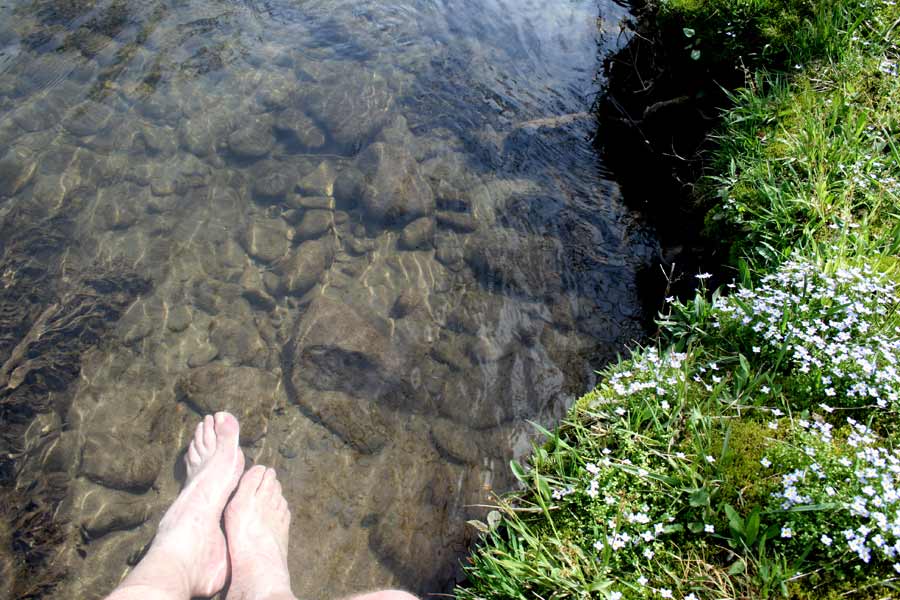 I walked around the village and tried desperately to connect in some spiritual way, but was unable to do so.

I got so frustrated that I began searching for a campground and drove way back up into the hills. I finally discovered the Indian Creek Campground, which was still on the Cherokee Indian Reservation, but it was so far back in the woods that I was now, far away from all of the tacky gift shops and souvenir shops. I truly wanted to connect with the land and figured this was the best way to do so. 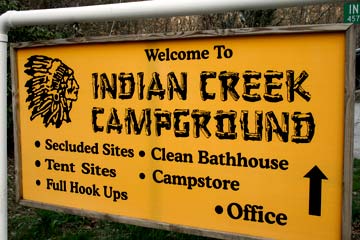 The one thing that I truly loved about Cherokee, however, was the fact that the signage around town used both the English and Cherokee alphabets. A nice touch. 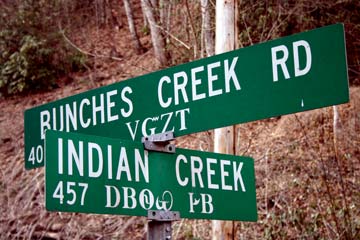 I finally found my campsite for the night; site No. 67, which was at the very end of the campground. I was so far back, in fact, that my tailgate almost extended over the small creek that ran behind my site. 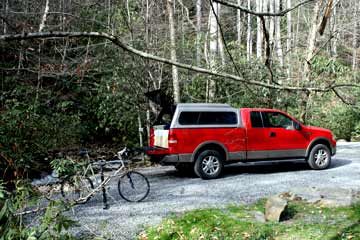 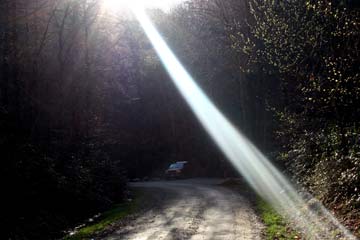 That evening I did my 72 Days of God meditation and worked on my journal. I also contemplated what I should do over the next few days. A cold front was quickly approaching, and I had to find a warm place to stay. I had to take my journey indoors once again.

That night, once everything was quiet and all the lights were out, I looked up at the many stars hovering over the campground. I was utterly grateful to be where I was. I did my little ceremony before going to bed that night.

“In Cherokee belief, the departed souls arise into the sky to become stars, and it is from the stars that souls come to earth to be born as children. The planets, stars, and constellations, the “Star People” showing their faces at the birth of a child, speak to his or her strengths and weaknesses and to destiny’s role for that individual. The link between the People and the stars, between Earth and Heaven, is so strong that it’s even claimed that our ancestors came to earth “from the Pleiades.” At the end of the Seventh World, it’s said that we will return to our home in the sky.”