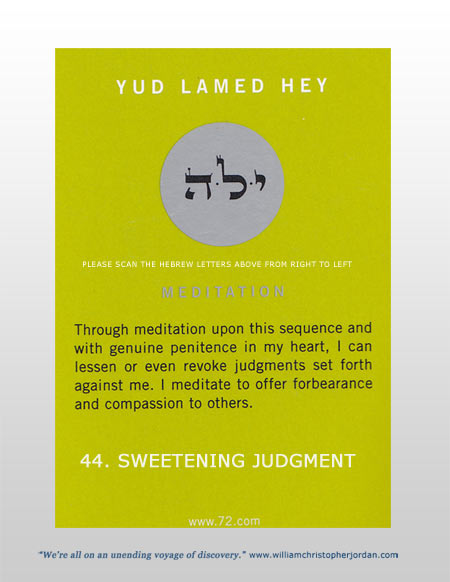 I woke up, ate breakfast and logged on to my computer to publish my journal entry for March 31. As I was waiting for my computer to boot up, I noticed someone had left a note under my windshield wiper. It was from my new friend, the magician. It was such a nice message to start out the day. 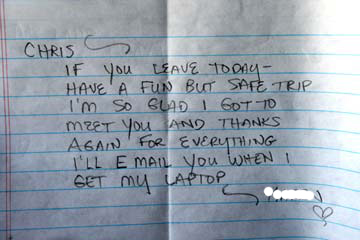 When I checked my email, I discovered a message from a guy named, Lansing; my fifth participant in my 72 Days of God survey. Here’s an excerpt from his letter, “I too have found myself at an interesting life point where a planned six month sabbatical from my work turned into an unplanned 19 months. It has been humbling to be broke, and as of 3 weeks ago, homeless. However, I am surrounded by love and not worried in the slightest about the future, since life always seems to turn out.” After glancing briefly at Lansing’s Destiny Card Yearly Forecast, I could see that his life was going through a transformation. I prayed that his transition would be a positive one.

Lansing’s answers to the 72 Days of God questions:

1) Do you believe in God? If so, based on which religion or spiritual practice? If not, why? Yes, I do. I have pretty much had certainty about God for as long as I can remember. I wasn’t ever enrolled in God- or a concept of God by anyone. There is a story that sometimes the apostles of Jesus would have great philosophical arguments about God- and then ask Jesus to weigh in on their debate. Christ would look at them and say “God is.” and then walk away. I always knew that.

2) What does the concept of God mean to you? I don’t have one. I would have to admit that being human- I have a tendency to conceptualize everything that comes to mind in some fashion, but when it comes to God, I don’t hang on to any of those concepts since I know that is all they are. “I am that I am.” is about as close to an abstract representation of God as I might subscribe to- or what Jesus said, “God is.”

3) What do you feel is the purpose of life on earth? Waking up. And I mean being fully awake. When that happens, the meaning of this existence starts to reveal itself as happening in a dream. Dreams can seem very, very real- and I think we have them to help us wake up. If it’s possible to have dreams seem as real as they do- but on waking we discover “It was only a dream”- how is it any less possible that that is exactly what is happening all the time? Whenever you Awaken, time and space are no longer real, but only imagined, as they are in dream. Given that time and space usually seem pretty real to me, I would guess that I am still very much asleep- but awareness of one’s condition i.e.- still being asleep, is a step in waking up. When you are Awakening, the only other thing to do is to wake up any part of yourself that appears to still be asleep.

4) What are you most passionate about and what do you wish to accomplish with your life? A few Passions…Being present with children. Painting, drawing and sculpting, photography. Writing. Sex. I love really good sex. Singing- Singing can be as good as sex. Cooking great food. Cooking and eating great food is sometimes better than sex and singing. I like to be cool/cold when I sleep- so having cool sheets and cool pillows and a cool room with a fan on are very important to me. If I am going to fall asleep and dream- I like to do it in cool comfort. | What do I want to accomplish in life…There really isn’t a whole lot left on my list. I would say- see #3 above- but I notice that I am a bit lazy about waking up- and often choose more sleep and interesting dreams- literally and figuratively.

5) What do you truly believe happens when you die? Nothing really. In order for the dream of our existence to continue- I think when we “die”- we find ourselves waking up in some other aspect of a seemingly bigger dream- and we most likely choose to go back to sleep into another part of the very dream we just woke up from. – Some people call this reincarnation. – When you are fully Awake this no longer becomes necessary, since you realize it was all just a dream in the first place. I think maybe Christ, Buddha and others chose/chose to come back into this dream, fully Awake, to Awaken the aspects of them/ourselves that appear to be asleep.

After I packed up everything I departed the Pecan Grove RV Park. I left at 10:00 AM. I headed north on Interstate 35, towards Waco, Texas. It was a beautiful, sunny, Texas morning.

Approximately two hours later I arrived in Waco. That’s when I merged onto Highway 31 going east. This highway brought me to Corsicana, and then Athens, Texas. On the east side of Athens, I drove past a field covered in gold wildflowers. After contemplating for a mile or so, I turned my chariot around and returned to the field. A few minutes later I pulled into the Athens Organic Garden Supply shop, which was next to the field. 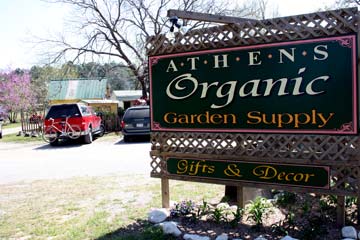 As I got out of my truck, I discovered that I had sat in a wad of chewing gum.  I spent the next ten minutes scraping gum from the seat of my truck. I then got an extra pair of shorts out of the back of my truck and went into the garden shop to change. As I was walking inside, I met the shop owners new puppy. The dog collar had the name Princess on it. Princess had the most beautiful eyes I had ever seen on a puppy. 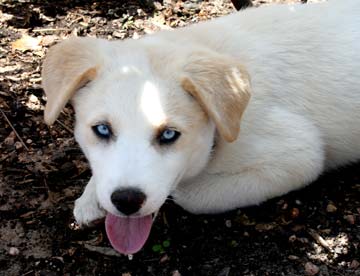 I walked up to the shop owner and asked if he had a restroom that I could use to change my shorts. He pointed me towards the shop and told me the bathroom was inside, to the right. I came back out a few minutes later and asked the shop owner’s wife if she knew how to remove gum from clothes. The shop owner took one look at my shorts and said he had something that would take care of the problem. We went back inside and soaked my shorts in some particular cleaning solution which he had stored behind the counter.

I then asked him about the field and if it would be possible for me to take a few photographs. He told me that the area belonged to his neighbor, a 95-year-old woman who apparently would not have minded at all. Then he offered to give me a ride over to the field on his John Deere Mule. I accepted. Once we arrived at the field, I took the following photographs. 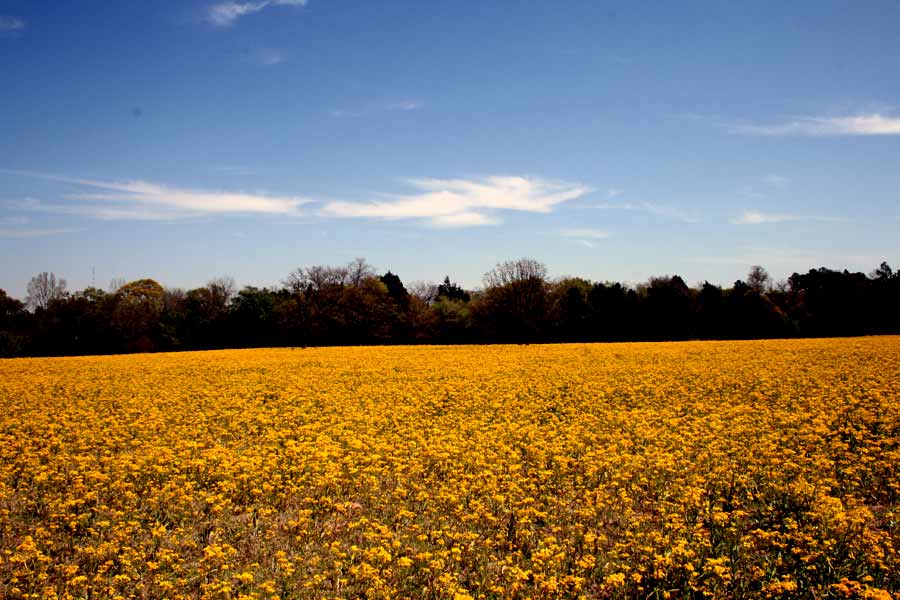 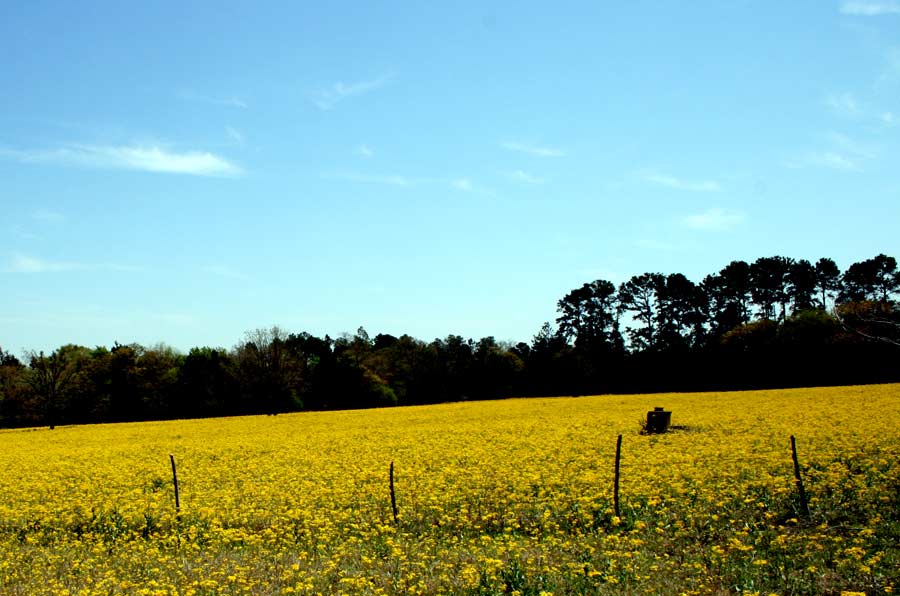 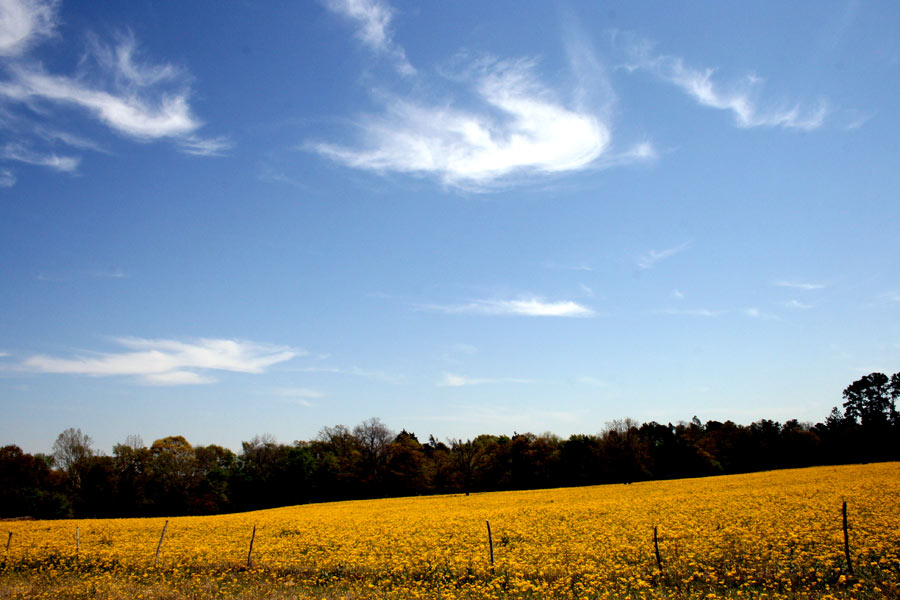 After I finished taking photos of the field, the shop owner continued to tour me around his property on his mule, showing me various plants and flowers. They all reminded me of North Carolina. He was so incredibly nice. I couldn’t have come across a more friendly person.

We returned to the shop, and after a few minutes of scrubbing, I was able to remove every bit of the chewing gum from my shorts. I then asked the shop owner for his email address, so I could send him the photos of the field. He wrote down his email address, and I thanked him for all of his help. I got back in my truck and continued east on Highway 31.

It was about ten minutes later that I reunited with the hawk. Once again, just like so many times before, the hawk flew out from the woods on the side of the highway, circled directly overhead and disappeared back into the woods. I was so happy to see the hawk again.

Shortly afterward I reached the next town and as I pulled up to a stop light, stopped beside this young girl and took the following photo. 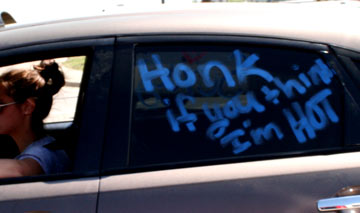 When I took the photo, the flash went off, and she gave me the strangest look. She probably thought I was the paparazzi. I don’t know why, but I got the biggest laugh from our brief encounter.

I continued down Highway 31 through Tyler and Kilgore, Texas and eventually merged onto Interstate 20. I reached Louisiana State line at 4:00 PM. I arrived in Shreveport about an hour later and began feeling my way around town. Shreveport wasn’t a difficult town to figure out, so it didn’t take me very much time.

I spent the evening checking out different places and restaurants and decided there wasn’t a lot to do or see. That evening I pulled into one the many casino parking lots and crawled into the back of my truck, and went to sleep. I decided that I would continue my drive east the following morning.