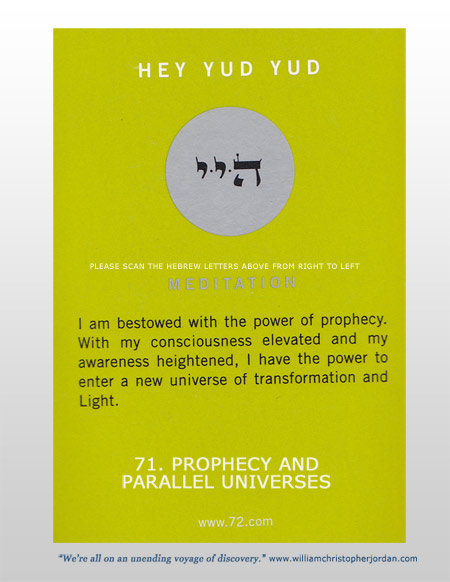 I crawled out of my truck around 8:30 in the morning and discovered that my niece and her boyfriend had left for work. I walked into the house and found a few items left on the stove for me. One of those items was an envelope with instructions to open it while on the ferry, which I planned to take from Fort Fisher to Southport, North Carolina. 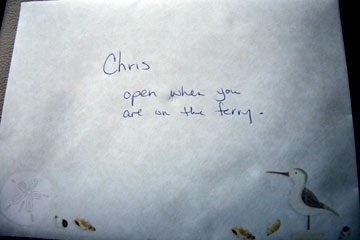 I wrote a note to my niece and told her I would see her again soon and then headed for the ferry at Fort Fisher. I arrived at the boat about thirty minutes later. 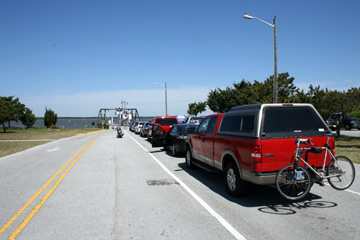 Doing as instructed, I opened my niece’s letter and found the most beautiful card inside. It read: “Chris – Little $ to help w/another day. Love you with all my heart. Tonya” And then she included forty bucks. I felt so incredibly blessed and was extremely grateful. It truly made my day. 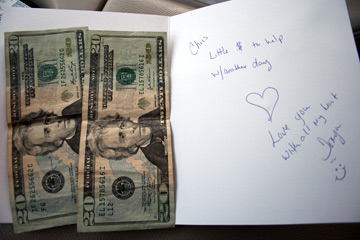 After I got off the ferry at Southport, I checked my email and discovered that Mark had responded to my 72 Days of God survey.

Mark’s answers to the 72 Days of God questions:

1) Do you believe in God? If so, based on which religion or spiritual practice? If not, why? Yes. I have always believed in God. I have not always believed in religion. As long as I can remember, I have felt in my heart that our existence could not have happened by accident. The emotions and feelings I experience could not have been created simply by a few atoms connecting together in just the right way by chance. I believe there is more to us than our physical bodies, and that our experiences we have in our earthly existence are lessons in our overall progression as beings. Do I believe in evolution? Yes. Do I believe in a creative force that created the conditions for evolution to happen? Yes. Did I find a religion that I can identify with? Yes: Divine Metaphysics. It took me 40 years to find it, although I think I’ve always understood the principles in my heart. Its rewards have led me to the ministry to learn, understand and teach as much as I can.

2) What does the concept of God mean to you? God is the energy of all that is. I do not see God as a man with a beard on a throne throwing lightning bolts or passing judgment based on some predetermined rules. God is the energy that gives us life, gives us substance. It is all – what we perceive as good and bad; animate and inanimate; soulful or soulless. God is. We are part of that God energy, and we are what we choose to be. Does God judge us? Not in the way most people think. God’s “judgment” is our own judgment of ourselves and each other. We are all part of the “God system,” so our personal judgment – and what we choose to do with it – is part of God, too. There is no single entity controlling the ship on this voyage of life on Earth. Where humankind has been, and where it is going, is guided by natural law, and by the choices we make within that law.

3) What do you feel is the purpose of life on earth? I believe that this human existence is a brief stop on an eternal path of growth and unfoldment. The lessons we learn here are meant to give us higher understanding as we continue on our progression in this life and the next – in this “world” and the next.

4) What are you most passionate about and what do you wish to accomplish with your life? Sometimes I think I’m not passionate about anything in particular, but then I realize that I have passion for the search and understanding of truth. What is truth? I haven’t figured it out yet, but I’m satisfied with what I have learned so far. Truth is found in all things, but I find myself particularly drawn to expressions of artistic creativity and closeness with nature.

5) What do you truly believe happens when you die? I believe that our existence never stops – we simply step out of our earthly body, our mind clear and intact, just as we stepped into it – ready to prepare for the next stage of our eternal existence, and our quest for perfect being.

Thanks, Mark. I really appreciate you taking the time to respond to my survey. Your wisdom is truly appreciated!

I then headed to the place where I spent all of my summers as a child and a teenager. It was a tiny town directly across the Inlet Waterway from Long Beach, North Carolina, known as Sunset Harbor.

If there was any one place on the planet that held exceptional memories for me, it was Sunset Harbor. It wasn’t an easy life because our trailer didn’t have air conditioning for the most part and the water tasted like sulfur, and the pressure in the shower was always weak, but for some reason, none of those things mattered. I still managed to be extremely happy there.

My parents had bought me a golf cart, and I had the freedom to go anywhere that I wanted as long as I stayed on the dirt roads, which made up 90% of the streets throughout the small community. I stayed on the road, continually exploring various parts of the town and spending lots of time in the woods and around nature. I could write an entire book on Sunset Harbor alone.

While I was driving around, I passed the corner where our trailer once stood. The new owners had replaced our vacation trailer with a new trailer, which didn’t look unique, or maintained, but it still looked familiar enough to me, and I was able to recall some exceptional memories. 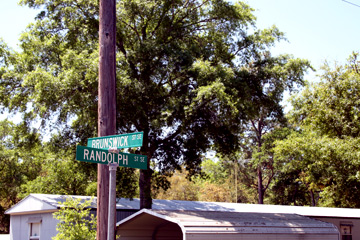 I compared my days of exploring Sunset Harbor on my golf cart, to my 72 Days of God journey and realized they were one in the same. As long as some movement or growth was involved, I was happy.

I left Sunset Harbor and headed south on Highway 17, towards South Carolina. I then spent the next hour driving through the back roads and swamps of southeast North Carolina, making my way to where my mother grew up as a child.

As I drove towards Bethel, North Carolina, I approached the cemetery where they buried my grandparents. My parents had also buried their first child in this cemetery, which had only lived a day and a half. I decided to stop in and pay my respects.

As I approached the cemetery, I remembered how my mother would always start crying before we pulled in. She was extremely close with her father, and just the thought of visiting his grave brought tears to my mother’s eyes every single visit. 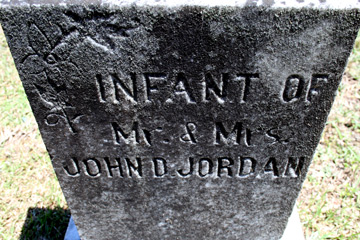 I decided to sit on one of the markers directly in front of my grandparents stone. I looked at the dates of their births and deaths and realized there was so much that I didn’t know about them. My grandfather died when I was eight years old, and my grandmother passed away when I was seventeen. When I got up to leave, I noticed that the date on the marker that I had been sitting on was 1923, the year my mother was born. At that very moment, I felt my mother’s presence, and I started to cry. Suddenly, I felt a connection that was unexplainable, and it brought tears to my eyes if only to make the relationship very real to me. To me, that connection was just one example of God. 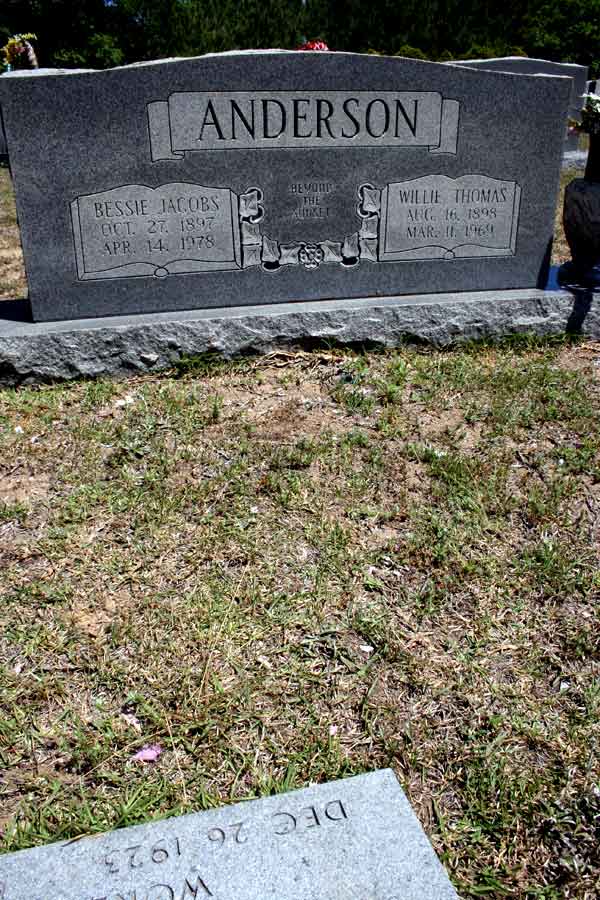 I left the cemetery and drove a mile down the road to my aunt’s house. My aunt, my mother’s oldest living sister, had turned 90 years old in December of 2009. My family had a huge reunion for her birthday, but I was unable to make it because I was stuck out in Portland, Oregon.

I stopped in and paid my aunt and my cousin a very long visit, and apologized for not making it to her birthday reunion. At 90 years old, my aunt was still a force to deal with. Her faith in Jesus Christ and the Lord was so incredibly strong that she believed that she could prevent hurricanes from coming onshore. She had put this to the test several years back when a storm headed for North Carolina. Sure enough, after her intense, heartfelt prayers, the hurricane just spun off the coast of North Carolina and then headed out to sea.

While I was visiting with my aunt, she began to tell me the story of Adam and Eve. Then she moved on to Noah’s Ark and how the Lord had asked Noah to gather a male and female of every species of animal for the ark before the flood came. I felt like I was in Sunday school all over again.

I had an excellent visit with my aunt and a couple of my cousins, and I thanked God for bringing me to them safely. As I pulled away from their house, my cousin opened the front door and stepped outside to wave goodbye to me. At that very moment, I got another glimpse at God. 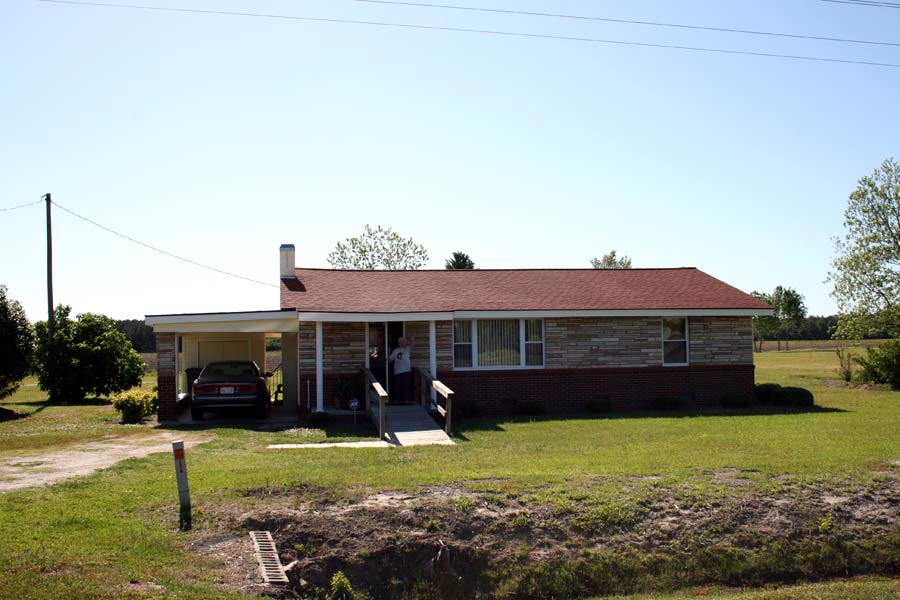 I then began my three-hour drive to my hometown. Because my parents had made this drive so many times while I was growing up, I knew exactly which roads to take.

About an hour outside of my hometown, at approximately 7:40 PM, a hawk flew directly across the highway in front of my truck as if to welcome me home. I arrived in my hometown at 8:40 PM.

The first place that I visited was my parents grave. I placed the shell, which I had brought all the way from the California coast, on my mother’s headstone, along with the crystal that Casey gifted me back on February 16, the day I left Portland. 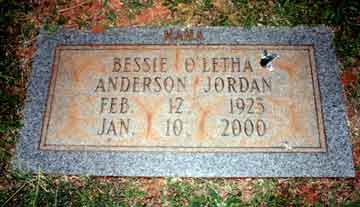 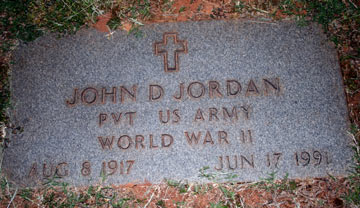 I then sat in my truck and worked on my journal and watched the full moon come up over the horizon. It was a very magical moment.

After I left the graveyard, I headed drove to my niece’s house, who had celebrated her twenty-sixth birthday the previous Sunday. I visited with her and her husband and left their home at 11:32 PM. I then drove to my sister’s house. My sister and her husband were at their mountain cabin in Gatlinburg, Tennessee, so I had the house all to myself.

I got online and chatted with my friend, Pam, in California and went to bed shortly afterward.