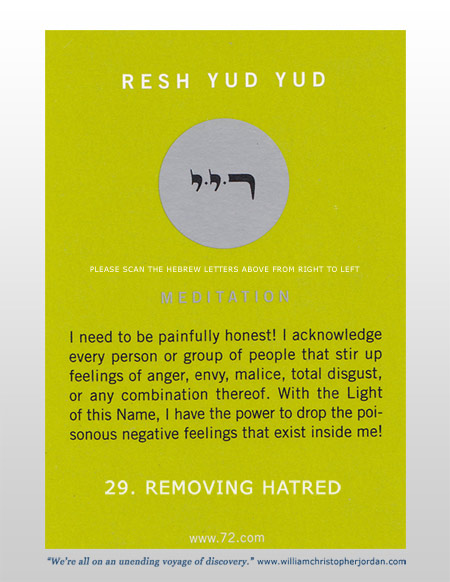 Where ever you camp for the night
Make sure the price is just right
If it isn’t free…
Then continue to see
If another good spot is in sight.
– Casey

I worked on my journal for at least two hours. It was 7:00 AM when I headed into Big Bend National Park. I drove straight to the rangers station and arrived right as the sun was coming up over the canyon walls. It was 8:08 AM.

I then got directions on how to obtain a campsite, drove another thirty minutes to the campground and sat around and waited for people to pack up and leave. Luckily, I ended up with campsite number 63. I still did not have an air card or Internet reception, but I felt more comfortable knowing that I was in a national park, and not some RV park stuck out in the middle of nowhere. 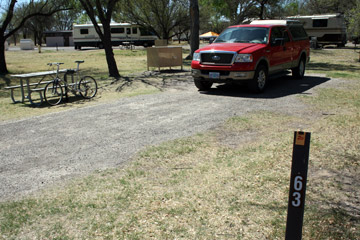 The first thing I did was eat breakfast, and then I took a hot shower, which cost $1.50 for five minutes. I just stood there and let the hot water wash over me. It was like heaven on earth. Once I changed clothes and got cleaned up, I drove over to the Boquillas Canyon Trail. Even though I had only had four hours of sleep, I still wanted to get one good hike in for the day.

After I parked my truck, I hiked down to the Rio Grande and discovered the most exciting scene. Mexicans were crossing the Rio Grande, from Mexico into the United States, on horseback and peddling their goods on the steps of the park trail. When I appeared, they all started signaling one another as if a Border Patrol agent was coming, but once they figured out I was just a regular tourist, they resumed their daily business.

I couldn’t help but think about my friend Jose back in Denver. He would have got the biggest kick out of this. Since Jose was from Mexico, he would have talked one of the guys into giving him a horseback ride across the river into Mexico, and then sat down on the banks of the river and talked to everyone for a while. 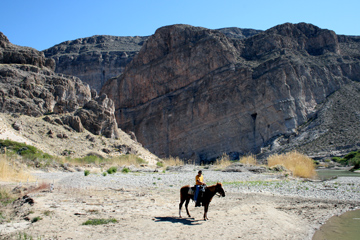 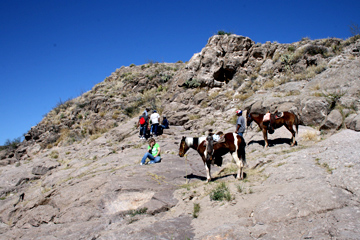 At that point, I started thinking about Jose and got a little sad that he wasn’t with me. I always envisioned the two of us taking this journey together. But as life would have it, I ended up going it alone.

I spent the next hour hiking the banks of the Rio Grande. At one point I passed a Mexican singing loud from the Mexican side of the river and asking tourists on the US side to put money in his jar, which he had conveniently left in the sand. He had a nice voice. His voice echoed across the river and down through the valley, adding a certain spiritual atmosphere to my hike. The fact that I couldn’t understand what he was singing made it even more mysterious.

While on this hike I began reflecting on the events leading up to me losing my job, and the emotional roller coaster that I went through with that entire experience. I spent a very long time, mostly over the 2009 holidays, dealing with the anger, hurt and hatred that had built up inside of me. It wasn’t until mid-January, 2010, that I was able to turn all of the anger and resentment back on myself and use it as a motivating force to get out and do something positive with my life. Shortly afterward I decided to take this journey. It was the best thing I could have done for myself. I had to get out and see the world, while at the same time give God the opportunity to show me my life’s real purpose.

When I reached the end of the trail, I turned around and began my long walk back to my truck. As I was walking up the steps of the path, I noticed two dried reeds laying on the ground in the form of a cross. To me, it was a visible sign of personal sacrifice. I had not only sacrificed my relationship with Jose, but I had also sacrificed my job, all so I could take this journey. 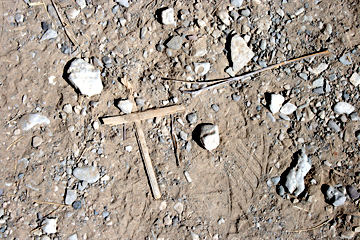 I returned to my campground and soon discovered that the Rio Grande was also less than a hundred yards from my campsite. I ventured back into the brush and found a much more secluded area. I took off my shoes… 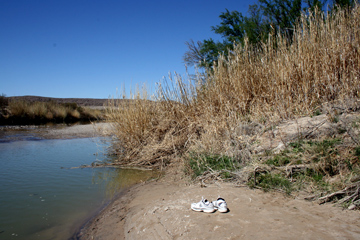 and waded in the water. It was very refreshing, and not as dirty as this photo appears. 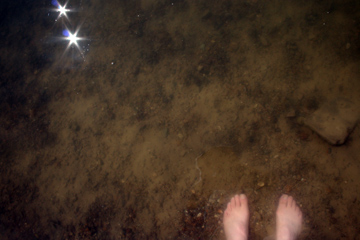 As I was walking back to my campsite, I came upon my very first Roadrunner. I followed this guy around for at least fifteen minutes and he never once ran off. 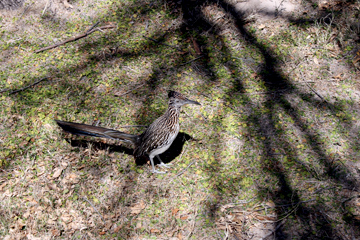 And then, as if I hadn’t already seen enough, this bright reddish-orange bird started flying around my campsite. The bird was so quick and agile. It was a Vermillion Flycatcher. 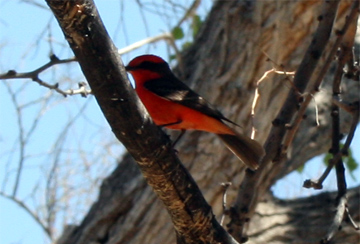 I then spread a blanket out on the ground near my campsite and took a much-needed siesta. As I was about to get up from my nap, I looked up and snapped the following photo. 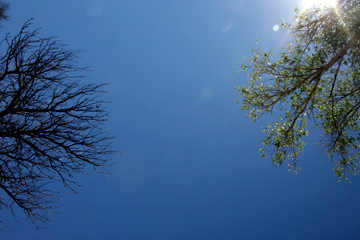 The Death 0f Winter Reaching Out to the Birth of Spring

Big Bend is so spread out and so large, that it requires at least a thirty to forty-five-minute drive to get to the next village. Since I had to publish an update on my journal and get in touch with a few family members to let them know where I was staying and to call one of my nieces to wish her a happy birthday, I made an effort to drive to the only lodge in the park. Here I was able to connect using their Internet service. I spent several hours here before returning to my village in the evening.

That night, after standing in line for over an hour to take a shower, I finally settled in the back of my truck for another attempt at a good nights rest. As I was laying there trying to unwind from the events of the day, all of these strange fears started coming up for me again. Will I get too cold tonight? Will I be able to sleep through the entire night? Will I have car trouble between Big Bend and my next destination? Should I go back to Portland, or should I head to North Carolina to visit family? If I do visit family, will I get stuck there? If I get stuck there, will I be happy? The questions went on an on, and I could not shut them down. I thought to myself, so much for living in the moment and having no expectations!

I got so frustrated with myself that I took an anti-anxiety pill which had been prescribed to me when I lost my job. After that pill took effect, I went to sleep and didn’t wake up again until the following morning.